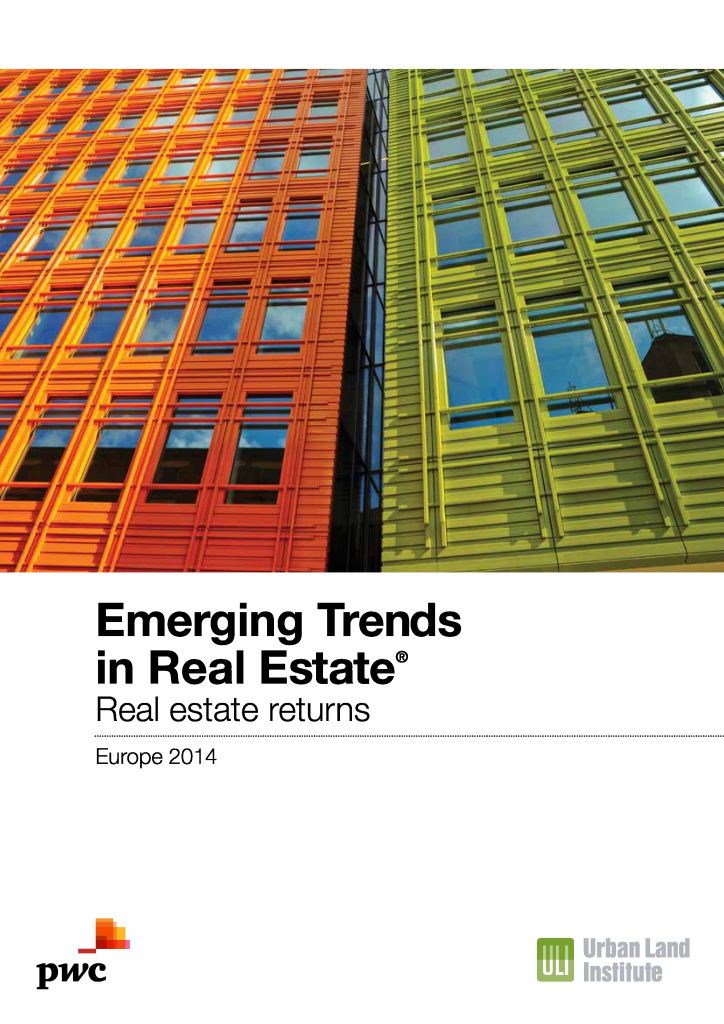 The competition for prime assets in Europe’s major real estate markets is leading investors to turn to recovering markets such as Ireland and Spain, regional cities and secondary property in search of returns, according to Emerging Trends in Real Estate® Europe 2014, a forecast published jointly by the Urban Land Institute (ULI) and PwC.

Emerging Trends in Real Estate® Europe 2014 finds that 71% of respondents think that a shortage of suitable assets for acquisition will have a moderate or significant impact on their business during 2014. As a result of this increasing competition, 59% of respondents believe that prime property in Europe’s core markets has now become overpriced.

The report highlights that investors are becoming increasingly comfortable with taking more risk in search of returns. One of the biggest beneficiaries of this is Dublin, which has risen dramatically in the city investment rankings, moving up from the 20th rank in last year’s report to second place in 2014. Dublin’s real estate market has been transformed from a “no-go” location among investors only two years ago to being one of the hottest markets in Europe, with both domestic and international investors attracted by pricing levels and Ireland’s improving economic outlook. The report finds that 51% of respondents now see good buying opportunities in Ireland.

The weight of international capital is leading investors to also turn to other recovering markets such as Spain. The report highlights that 67% of respondents believe there are now good buying opportunities in Spain, with the acquisition of the Parque Principado mall in Oviedo by Intu and the Canadian Pension Plan Investment Board for €162 million indicating mainstream interest in the market. However, sceptics argue that debt is very hard to attain and that it is a risky market to invest in before there are signs of any growth.

The competition for core assets has also led to an increase in investors looking beyond prime assets in major European markets such as London, Munich and Paris, and instead buying solid income-producing assets in secondary cities. For example, office investors in Munich can achieve yields of approximately 4%, but those willing to invest in smaller German markets such as Stuttgart can achieve up to 6.5%. Investors are also looking to acquire secondary properties in major markets, which have good existing income streams or which, with careful asset management, could be transformed into core assets.

An interesting consequence of the “Battle for Assets” is that investors are increasingly considering development as a way of adding high-quality assets to their portfolios. The report demonstrates that 71% of respondents believe that development is an attractive way to acquire prime property.

The outlook for real estate debt availability is also improving, with 51% of respondents expecting the availability of debt for refinancing or new investment to increase this year; only 15% of respondents expect it to become scarcer. However, respondents were not expecting dramatic improvements to pre-recession levels and there remain significant geographical differences in perspective. The UK was the most upbeat on the prospects for debt, with nearly 90% expecting greater availability, while southern European and Benelux countries displayed a more cautious outlook.

The top five European real estate investment markets in 2014 are predicted to be:

Munich – The city continues to benefit from Germany’s position as the economic powerhouse of Europe and from a young, expanding population. Munich remains popular with core investors who are attracted by low unemployment and a lack of high-quality office buildings. The city also has a busy retail market and a strong serviced-based economy. It is rated first for existing investment prospects and second for development prospects but the outlook for new investments has fallen to seventh place. The report believes this is likely to be down to many investors seeing the city’s office market as too expensive.

Dublin – Dublin is the biggest winner in this year’s report, rising 18 places to second for existing investments and 14 places to first for new investments. Investors believe that 2014 will mark Dublin’s comeback, driven by improving economic conditions, with unemployment at its lowest level since 2009 and a forecasted GDP growth of 2 % this year. However, opportunities for investment will be limited due to the size of the market. Office prices have increased significantly over the past 12–18 months in prime locations such as the docklands, and local investors are predicting a further rise of 10% in 2014. Survey respondents highlighted there was significantly more equity available and that bank debt was becoming also available again for the right assets and investors.  The residential market is recovering, with prices for well-located properties having risen over 20 % last year; however, retail is still under pressure, with rents continuing to fall, albeit at a slower pace.

Hamburg – Hamburg’s diversified economic base helps sustain a steady demand of office space and there is considerable competition for core offices among investors, with yields now around 4.7%. Residential also shows long-term momentum due to the city’s relatively high population growth, boosted by inward migration. Rents have risen an average of 5.7% annually since 2007, but have now started to plateau. The growing population, combined with an above-average level of disposable income and 10.6 million hotel reservations each year made by both tourists and business travellers, provides Hamburg with strong retail fundamentals.  Limited new retail development has meant that supply of prime space is now tight.HafenCity, Hamburg’s gigantic redevelopment of its former port, is midway through creating an entirely new quarter that will double the population of the city centre. Due to be finished in 2025, it will also make Hamburg one of the most sustainable cities in Europe.

Berlin – Berlin’s young population and its growing influence as a European media and technology hub continue to make it an investment hotspot. Prospects for the residential sector are strong and rents in the city have been rising steadily, especially in recently modernised buildings. House prices in certain areas of the city have also doubled over the past year. Berlin’s office market is enjoying a mini-boom and is on most core investors’ target list. The city’s economy and tenant base have become more diverse and the demand for office space is set to grow as companies seek to expand. The retail sector is also experiencing good demand, with rents growing sharply in prime locations.

London – London’s reputation as a safe haven for international capital means that it remains a firm favourite with investors seeking core and core-plus assets.  Large amounts of sovereign capital from Asia and the Middle East are continuing to flow into the city and very few deals or assets are now seen as un-fundable. However, this popularity has led to price inflation and there is concern that a bubble is now developing. Many respondents believed that London was fairly fully priced and as a result investors would look to other UK regions in search of returns or buy secondary assets which they can turn into core investments. Central London’s buoyant prime residential market is also attracting significant interest. The sector has not traditionally attracted institutional capital, but this is changing and both UK and international investors are tentatively starting to develop and refurbish property for both sale and rental.

More comprehensive trends and an overview of the Luxembourg market will be presented soon.

The Emerging Trends in Real Estate® Europe 2014 Report can be downloaded on PwC Luxembourg website.

Notes to the editor

Emerging Trends in Real Estate® Europe is a joint report published annually since 2003 by the Urban Land Institute (ULI) and Pricewaterhouse Cooper (PwC). The report provides an outlook on European real estate investment and development trends, real estate finance and capital markets, as well as trends by property sector and geographical area. It is based on the opinions of more than 500 internationally renowned real estate professionals, including investors, developers, lenders, agents and consultants.

About the Urban Land Institute

The Urban Land Institute (www.uli.org) is a global non-profit education and research institute supported by its members. Its mission is to provide leadership in the responsible use of land and in creating and sustaining thriving communities worldwide.  Established in 1936, the Institute has nearly 30,000 members representing all aspects of land use and development disciplines.