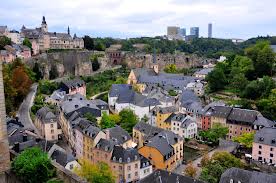 Simply known as ‘The City’ by most Luxembourgers, Luxembourg City is considered the heart of Europe’s cultural, economic and political life.

In the course of its history, spanning more than a thousand years, Luxembourg City has grown from ‘Lucilinburhuc’, the seat of Siegfried, the first Count of Luxembourg, to the prosperous and dynamic city it is today. In between lie centuries of turbulent history, reflected in the city’s silhouette that towers above the impressive remains of the historic fortress.

In 1994, the powerful fortifications and the old town, equally steeped in history, were listed as a UNESCO World Heritage Site. One of Luxembourg’s main attractions is the impressive contrast of architecture. The city’s topography is characterised by green river valleys that can be crossed by over a hundred bridges, providing links between the historic and modern parts of the city.

Its population is multilingual and cosmopolitan. Of the approximately 100,000 inhabitants, over 66% are foreigners, a fact that is reflected in the wide range of international cultural events which take place on an ongoing basis.

Daily life has a thoroughly European feel to it. The city is a true linguistic melting pot – in shops, restaurants and cafés every language from French to Finnish to Russian can be heard. This phenomenon is mainly due to Luxembourg being:

The Place de l’Europe features striking futuristic façades, which house not only EU offices and conference rooms, but also impressive cultural institutions like the Museum of Modern Art Grand-Duc Jean (MUDAM) and the Philharmonie.